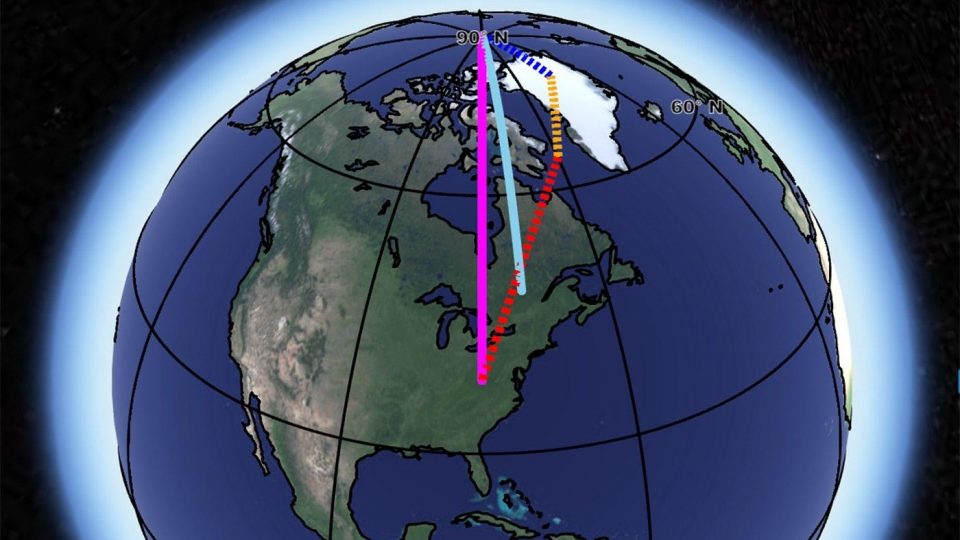 Climate change is probably responsible for a the north pole’s drift by a change in direction of about 71 degrees toward the northeastern tip of Greenland.

According to todays report by science news, the locations of Earth’s geographic poles, where the planet’s axis pierces the surface, aren’t fixed. Instead, they wander in seasonal and near-annual cycles, largely driven by weather patterns and ocean currents (SN: 4/15/03). But in addition to moving about in relatively tight swirls just a few meters across, the poles drift over time as the planet’s weight distribution shifts and alters its rotation around its axis. Source: sciencenews.org.

Before the mid-1990s, the North Pole had been drifting toward the western edge of Canada’s Ellesmere Island. But then the pole veered eastward by about 71 degrees toward the northeastern tip of Greenland. It’s continued to head that way, moving about 10 centimeters per year. Scientists aren’t quite sure why this shift occurred, says Suxia Liu, a hydrologist at the Institute of Geographic Sciences and Natural Resources Research in Beijing.

Liu and colleagues checked how well the polar drift trends matched data from previous studies on glacial melt worldwide. In particular, glacier melt in Alaska, Greenland and the southern Andes accelerated in the 1990s (SN: 9/30/20). The timing of that melting, as well as the effects it would have had on Earth’s mass distribution, suggests that glacial melt induced by climate change helped trigger the change in polar drift, the team reports in the April 16 Geophysical Research Letters.

The team’s analysis shows that while glacier melting can account for much of the change in polar drift, it doesn’t explain all of it. So other factors must be at play. With copious irrigation, for example, groundwater pumped from aquifers in one region can end up in an ocean far away (SN: 10/9/19). Like glacial melt, water management alone can’t explain the North Pole’s tack, the team reports, but it can give the Earth’s axis a substantial nudge.

The findings “reveal how much human activity can have an impact on changes to the mass of water stored on land,” says Vincent Humphrey, a climate scientist at the University of Zurich not involved in this study. And they show how large these mass shifts can be, he says. “They’re so big that they can change the axis of the Earth.”

School Resumption: We Are Ready To Resume-Varsity Lecturers

Flooding In Nigeria: US To Assist Victims With $1m