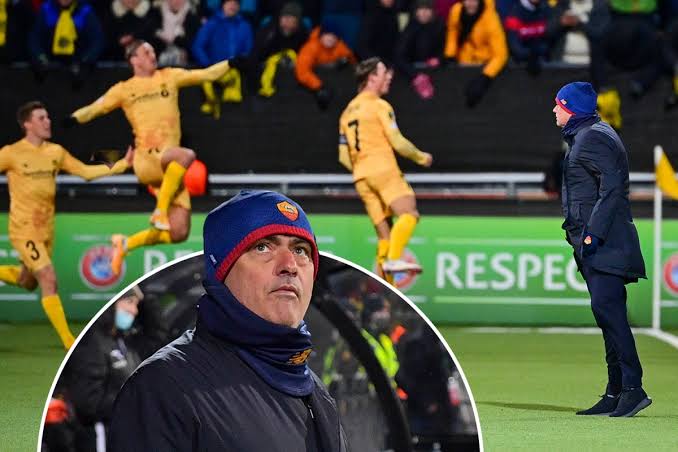 AS Roma coach, Jose Mourinho has reacted on Thursday after his side suffered a devastating 6-1 defeat to Norwegian champions, Bodo/Glimt in the Europa Conference League.

The defeat was not only a shocking one for Roma, but a heavy one in the history of Jose Mourinho’s coaching career.

The former Manchester United coach witnessed how Bodo/Glimt’s  Erik Botheim and Patrick Berg’s scored in the 8th and 52nd minute while Carles Perez replied with a superb finish in the 28th minute.

While the goal galore continued with a third from Bodo/Glimt through Botheim, tapping in from close range, the Portuguese opted for substitutions as an option to savage the situation. Three changes were made at the start of the second half, while another two on the hour mark

The option later resulted into a worse situation for Mourinho and his side as Ola Solbakken’s secured the fourth goal, while Amahl Pellegrino added a fifth before Solbakken claimed his second in the match.

Going memory lane on Mourinho’s career, the game against the Norwegian side is his 1,008th match, which also ended as the first time his side will concede six or more goals in a single game.

The last time he experienced a defeat close to the current one was the period he managed Spanish giant, Real Madrid, which the Los Blancos suffered a 5-0 loss against Barcelona in 2010. It has also been tagged one of the biggest defeats for Mourinho as a manager.

In reaction to the loss, Mourinho made some comments. The former Inter Milan coach, while speaking to Sky Sport Italia said:

“I decided to play with this line-up, so the responsibility is mine,” he told

“I did it with good intentions, to give an opportunity to those who work hard and to rotate the squad on a synthetic pitch in cold weather.

“I never disguised the fact we were a squad with real limitations. We have 13 players who represent one team, the others are on a different level.

“We lost against a team that showed more quality on the night. It’s that simple.”