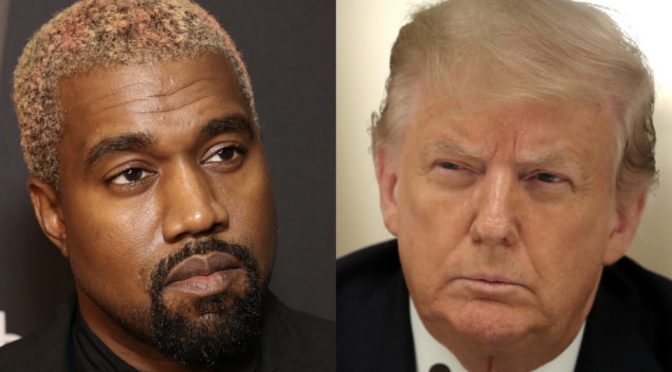 Renowned rapper Kanye West, said on Tuesday that he is no longer in support of President Donald Trump of the United States.

The aspiring politician disclosed this new development in a four-hour Forbes interview conducted on Tuesday, which was released on Wednesday. He has also taken off his hat which was tagged: ”MAGA”, meaning: Make America Great Again.

According to CNN, the Business mogul who has been widely criticized because of his support of President Donald Trump, reportedly told the publication he has lost confidence in the commander in chief.

West, while sharing his view said, “It looks like one big mess to me,” “I don’t like that I caught wind that he hid in the bunker.”

The “Closed on Sunday” wordsmith was referring to reports in June that Trump was briefly moved to an underground bunker during protests at the White House over racial injustice and police brutality.

On his political career, despite having missed deadlines in several states to actually get on the ballot, West’s comments come after he announced he is running for president himself.

Meanwhile, there are speculations around West’s intention to run for president of US. But the talented rapper insisted to Forbes that his run is not a publicity stunt and said he had no issue with the idea that his planned run could potentially take votes away from presumptive Democratic nominee Joe Biden and aid in the reelection of Trump.

Speaking further on the issue of public stunt West said, “I’m not denying it, I just told you,”  “To say that the Black vote is Democratic is a form of racism and white supremacy.”

“I’m not saying Trump’s in my way, he may be a part of my way. And Joe Biden? Like come on man, please,” the publication also quoted West as saying. “You know? Obama’s special. Trump’s special. We say Kanye West is special. America needs special people that lead. Bill Clinton? Special. Joe Biden’s not special.”