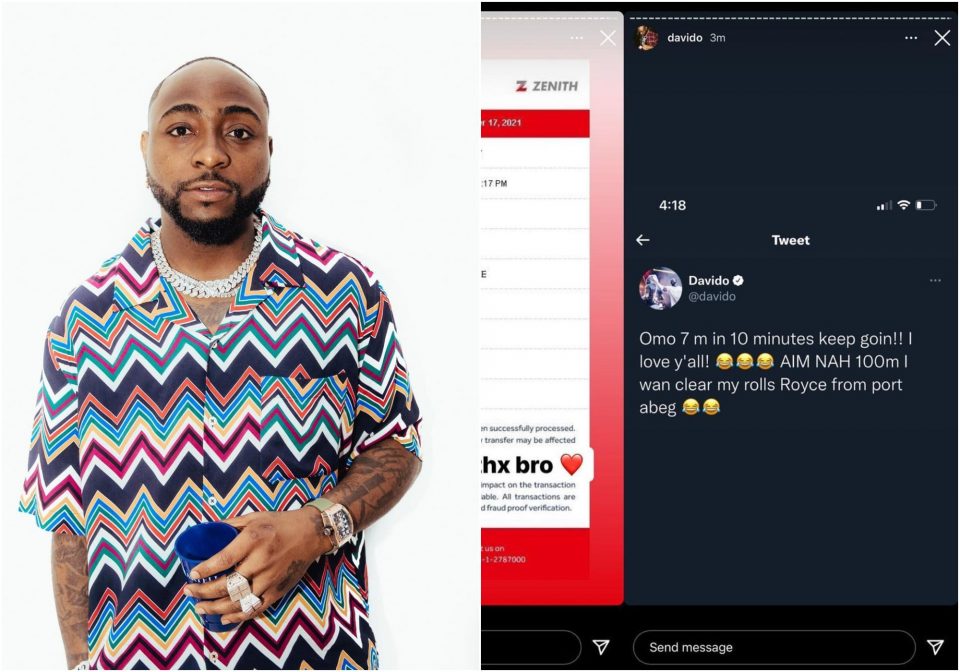 Renowned Nigerian singer, Davido on Wednesday received almost N200m after asking his friends and fans to donate N1m each to him for his birthday.

The activity which started with the music star jokingly calling on those he had helped in the music industry to send him a million naira each for money for his birthday, trended for hours and became an interesting activity which attracted the attention of a lot of people on the Nigerian social media space.

Entertainment enthusiasts and fans, and followers of the award winner later responded to   a video he posed on his Instagram story with deposits of cash.

The post from the song writer read: “We rise by lifting others abi? Me I don dey rise dey lifting others for the past 100 years. So, I want to know who my friends are. All of my friends one one million Naira. They said we are 30BG. If you don’t send your own. You out of here. You are gone (sic).”

Those that donated are: Nigerian businessmen, Obi Cubana and Femi Otedola. The singer, however, did not disclose the amount sent to him from the likes of Femi Otedola, Obi Cubana, E-Money, Patoranking, and some others.

Some brands were not as Kolaq Alagbo, Munch It, TravelBeta, among others made the list of donors to Davido.

Others are: Kid comedians, Ikorodu Bois, however, sent the singer a sum of N5000 while Baba Ali sent N1.5m. Musician and singer, MC Galaxy, sent N3m while Oba Elegushi sent N5m to the singer.

Davido’s baby mama, Sophia Momodu, also sent money to the singer. However, he did not disclose the amount sent.

In reaction to the remarkable gesture, the singer took to his verified Twitter account to announce that the bank he opened the account with for the fundraising, Wema Bank, wants to have a meeting with him.

The singer who got emotional made a post online with the inscription, “Na bank wey Davido dey use we go dey use now.”