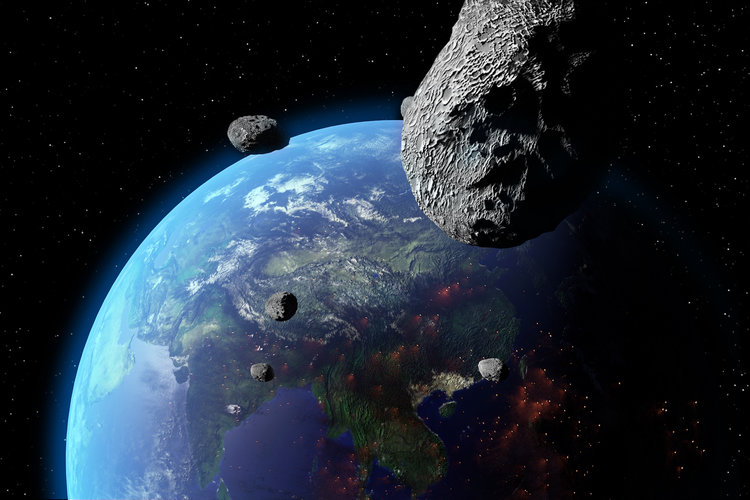 The largest Main Belt asteroid, indicate it is probably metallic and porous in composition, something like a flying cosmic rubble pile or planet remnant.

Artist’s conception of asteroid Psyche, whose composition has been proposed as a porous metallic body hurtling through space, thanks to computer modelling of its largest crater. Credit: NASA/JPL-Caltech/ASU

New 2D and 3D computer modelling of impacts on the asteroid Psyche, the largest Main Belt asteroid, indicate it is probably metallic and porous in composition, something like a flying cosmic rubble pile. Knowing this will be critical to NASA’s forthcoming asteroid mission, Psyche: Journey to a Metal World, that launches in 2022. Source: scitechdaily.com

“This mission will be the first to visit a metallic asteroid, and the more we, the scientific community, know about Psyche prior to launch, the more likely the mission will have the most appropriate tools for examining Psyche and collecting data,” said Wendy K. Caldwell, Los Alamos National Laboratory Chick Keller Postdoctoral Fellow and lead author on a paper published recently in the journal Icarus. “Psyche is an interesting body to study because it is likely the remnant of a planetary core that was disrupted during the accretion stage, and we can learn a lot about planetary formation from Psyche if it is indeed primarily metallic.”

Modelling impact structures on Psyche contributes to our understanding of metallic bodies and how cratering processes on large metal objects differ from those on rocky and icy bodies, she noted.

The team provides the first 3D models of the formation of Psyche’s largest impact crater, and it is the first work to use impact crater models to inform asteroid composition. The 2D and 3D models indicate an oblique impact angle where an incoming object would have struck the asteroid’s surface, deforming Psyche in a very specific and predictable manner, given the likely materials involved.

Metals deform differently from other common asteroid materials, such as silicates, and impacts into targets of similar composition to Psyche should result in craters similar to those observed on Psyche.

An animation video (above) using the team’s simulation output shows a theoretical impact scenario that could have led to Psyche’s largest crater. The simulation shows how some material is ejected into space after impact and reveals the crater modification stage, where the impact area shows the resulting damaged material.

The researchers’ results corroborate estimates on Psyche’s compositions based on observational measuring techniques. Of particular interest is the material that provided the best match, Monel. Monel is an alloy based on ore from Sudbury Crater, an impact structure in Canada. The ore is thought to have come from the impactor that formed the crater, meaning the ore itself is likely to have extraterrestrial origins. The modeling successes using Monel demonstrate that Psyche’s material composition behaves similarly under shock conditions to extraterrestrial metals.

The modeling tool used in the work, run on a Los Alamos supercomputer, was the FLAG hydrocode, previously shown to be effective in modeling impact craters and an ideal choice to model crater formation on Psyche. Based upon the probable impact velocity, local gravity, and bulk density estimates, the formation of Psyche’s largest crater likely was dominated by strength rather than gravity, Caldwell said.

“It’s incredible what we can accomplish with the laboratory’s resources,” Caldwell noted. “Our supercomputers are some of the most powerful in the world, and for large problems like asteroid impacts, we really rely on our numerical modeling tools to supplement observational data.”

This work was supported in part by a completion fellowship from the Arizona State University Graduate College, a grant from the Center for Space and Earth Science for Research and Development in Space Science, the Advanced Simulation and Computing (ASC)–Integrated Codes program at Los Alamos National Laboratory, and the ASC–Threat Reduction program at Los Alamos National Laboratory.